It’s even worse than the video demonstrates! #StopProp3

“I Didn’t Know” from Catholic Diocese of Saginaw on Vimeo.

Per Breitbart: Republican lawmakers in Michigan recently introduced a bill that would classify allowing a minor to undergo gender transition procedures as first-degree child abuse.

House Bill 6454 states that a person could be found guilty of first-degree child abuse if they “knowingly or intentionally consents to, obtains, or assists with a gender transition procedure for a child.” The legislation defines a “person” as a parent, guardian, physician, or any other licensed medical professional.

If that person is found guilty of first-degree child abuse, they could face a life sentence.

According to the Hill, LaFave believes it is “logically incoherent” to provide puberty blockers or conduct gender transition surgeries for children when they cannot even consent to sex or are legally prohibited from purchasing certain items.

“People are abusing these children. The idea that we would be making potentially life-altering changes to 11-, 12-, 13-, 14-, 15-year-old kids when it is illegal for them to have sex is insane,” he said. “I mean, they’re not responsible enough to smoke a cigarette until they’re 21.”

Contact MI State Reps Hoitenga, Harris & Filler: FIX HB 6354 & MCL 324.40118! It shouldn’t be a crime OR A CIVIL INFRACTION to fail to report a deer harvest ON THE DNR APP w/i 72 hrs; Hunting regulations must NOT be so complex; Hunting “violations” must NOT be CRIMES w/ possible LIFETIME hunting bans; DNR reporting must be easily accessible & consistent (call vs App vs ??); DNR ORDERS must NOT be treated like LAWS!

Check out these recent legal updates

3 Republican MI State Reps (Hoitenga, Harris & Filler) filed HB 6354 (tinyurl.com/2p6xew7u ) to make it a CIVIL INFRACTION to fail to report a deer harvest ON THE DNR SITE w/i 72 hrs!  But what’s worse is they are ok with the current law CRIMINALIZING “violations” of DNR orders!

Fences, like the one built by the property owner in Matthew 21:33, are a recognized way of protecting ones land, but they also help us heed the instruction in Proverbs 25:17, “Let your foot be seldom in your neighbor’s house, lest he have his fill of you and hate you.” So, don’t let your municipality get away with imposing unlawful or unconstitutional fence ordinances!

This week, we discussed Fence & Ground Cover Ordinances & HOA Rules. To check the constitutionality of your ordinances, you must first find them!  So, check out these #FreedomFightingTools:

Have you wondered what is lawful when it comes to fence & ground cover ordinances & HOA rules. This Constitution Segment Recap slideshow covers the provisions and statutes, check it out here: https://tinyurl.com/42ebarn3

Checking Ordinances for Unconstitutionality – Way to Get Involved Challenge 36

We shared how an unconstitutional ordinance allowed a man to be kicked out of WI village Turtle Lake, and how the Village Board chose to not only repeal this ordinance, but also reevaluate ALL ordinances to check for constitutionality. We now challenge you to THANK the Turtle Lake village board, AND urge your own city or town board to do the same check!

“Common Law” is NOT God’s law!

Where’s the proof the US is a corporation? There is no such proof. Why are people calling Common Law “God’s law?” Common law is literally judge-made “law,” or case precedent erroneously referred to as “case law.” Why are people advocating for case law?? There is a separation of powers for a reason! Common law is in no way “God’s law,” and is, in fact, no “law” at all!

T or F Tuesday Answer is FALSE! Local gov’ts may NOT enforce fence & ground covering ordinances (incl. permits w/ fees & inspections) UNLESS the ordinance is required to stop a homeowner from impairing the right of another homeowner to use his/her property. #ConstitutionMatters

Want to answer this weeks’ Tuesday TRUE or FALSE Question? You can answer it at tinyurl.com/2jkdbsju, with no email or social media login required! Make sure to check back to RestoreFreedomKH.com/Updates at 10PM EST for the Answer!

Why are HB 5672, SB 858 & HB 6032 from 2020 important now? We MUST remember which legislators voted for those horrific bills! They can otherwise be a great guy/gal, a stellar statesman, a “constitutional” conservative, but VOTING RECORD MATTERS! Talk is cheap – especially on issues so important (microchipping of humans, shutting down businesses for C19 fears, forcing people by LAW to stay home with symptoms of C19, etc.)!  Videos on the bills: tinyurl.com/27ukw9db starting at 4:38, tinyurl.com/s9va4xvc starting @ 1:24:15, tinyurl.com/4b82hyur re shutdown orders APPROVED by Republican legislators in SB 858, tinyurl.com/2j7md439 and tinyurl.com/3457wb9y on HB 5672.

Do you enjoy hearing a good Constitutional argument?  You know, the kind you can remember snippets of & use in conversations later… If you haven’t heard Katherine’s argument in the MI Supreme Court against unconstitutional mandates, check this out: https://tinyurl.com/45he7ymp https://bit.ly/3CcLj6B

Shame on you “Republicans”! You took an oath to the Constitution!

Shame on you “Republicans”!  You took an oath to the Constitution!

Katherine’s Allegan County Election Day 2020 Case has spanned from 11/3/20 to the present, for a total of more than 19 months as of today!  The trial is currently scheduled for Motion Hearings & a Settlement Conference on 7/7/22 with the Jury Trial on 7/13/22… But, this is the 8th trial date the court has given, so it is unsure whether it will be moved yet again.

Katherine initially filed a Motion to Dismiss, which was heard by the court on 2/4/21.  When the court denied her Motion, and violated several other rights she has, Katherine filed 2 Interlocutory Appeals in the Circuit Court in the Spring of 2021.  When the Circuit Court denied those appeals, Katherine filed them in the MI Court of Appeals, which chose not to take on those appeals at that time.  With the June 15, 2022 Trial Date approaching, Katherine filed several Motions in the trial court in May 2022 in order to secure her rights.  Those were set to be heard by the trial judge on 6/2/22, but the Judge moved the hearing on those motions to 7/7/22.
The legal arguments in Katherine’s documents from this case can be used by others in their own fights for freedom, or even just to educate themselves or others on general Constitutional topics.
By Katherine Henry|2022-09-07T10:51:23-04:00June 15, 2022|Categories: Allegan Trespass Case, Constitution, Laws|Comments Off on Allegan County Election Day 2020 Case Filings
Read More

As mentioned in our post regarding the Constitution Segment Recap, here is the PDF of all of the Motions & Briefs Katherine submitted Thursday, May 26th, to Allegan County 57th District Court: tinyurl.com/2p8j9j83

We would like to STRONGLY encourage you to take a few minutes to read the 1st link – “Notice of Hearing, Motion for Immediate Consideration, Proof of Service”. It gives the highlights of all the things that have been happening and what we are asking the court to do now. For more information on this case, and for more resources to fight your own situation, please continue reading the other documents submitted. We are also asking for prayers that the judge finally does the right thing in this case and dismisses both charges WITH prejudice (meaning charges cannot be resubmitted). 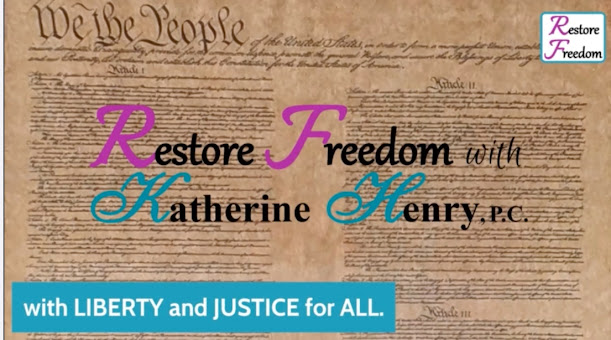 What happened yesterday to the Michigan Public Health Code?

What happened in the US Supreme Court yesterday for the Health Care Worker Vaccine Mandate? 011422 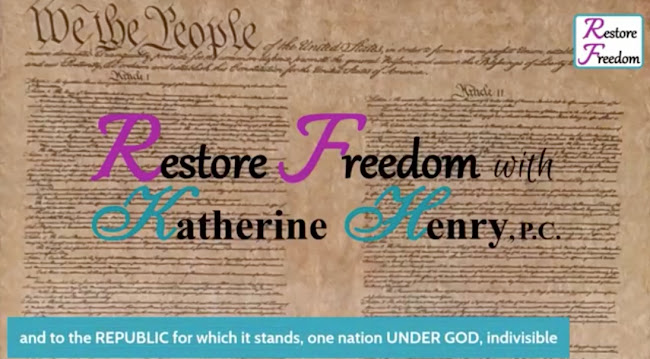 What happened in the US Supreme Court yesterday for the Health Care Worker Vaccine Mandate?

What happened in the US Supreme Court yesterday for the Private Sector Vaccine Mandate? 011422 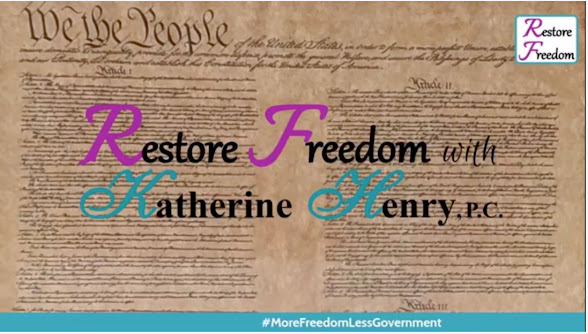 What happened in the US Supreme Court yesterday for the Private Sector Vaccine Mandate?

These letters from local health departments mention the following laws:

They are more sections of the Public Health Code Katherine has been warning us about since the beginning.

Have you watched this video? https://www.youtube.com/watch?v=pJSuHJT0Ty8&t=6s

Remember: The Legislature cannot give MDHHS authority to do something that it itself cannot do…

Can the Health Department Really do That?

Can the Health Department Really do That?

Another excerpt from Katherine’s MDHHS video on 061721 found here: https://youtu.be/VMIxYXVsQVM

She references a video she did live earlier on 061721 that can be found here: https://www.youtube.com/watch?v=NV48EiO3deI

Grab the Restore Freedom app for a one time fee (to help offset initial and monthly costs) at:

Check out RestoreFreedomKH.com for all updates.